It is constituted by a narrow valley, in part artificial, crossed by a wide water river, that closes with a pavilion. This building has been interpreted like a call to Canopus, the channel

that connected Alexandria with the homonymous city situated on the Nile delta, famous for the great nocturnal celebretions made there. 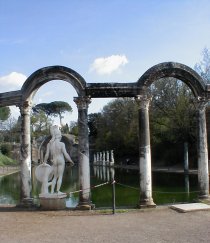 The measures of the sheet of water, located to the center of the valley, are 119 x 18 m; at east it was framed from a double colonnade, destined to support a bower, while a single colonnade ran along the west side, at half of which we find, instead of the columns, six statues (4 cariatidi, copies of those of the Athenian Eretteo without arms -so these complete statues of Villa Adriana supply us with a lot informations- and 2 Sileni canefori, that is bearers of basket, in which the capitello is replaced by a fruit basket, and that reproduce hellenistic alessandrini models).
These statues have been replaced by chalk copies; the original statues stay in the Museum of the Villa, gained from the two floors tabernae of the buildings of the western versant.

The short curved northern side is constituted with a mixtilineal architecture; among the spaces of the intercolumni there are statues symbolizing Atena, Ares, Hermes,

dated back to the Severa age, and two wounded Amazons, reproducing those of Fidia and Policleto, made for the temple of Artemis at Efeso (also in this case you can see the chalk copies, instead the original statues are in the said museum). 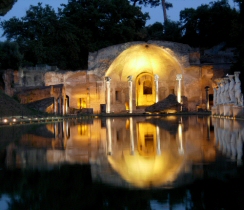 We don't know instead the exact locations, along the border of the swimming pool, of two statues, Nile's and Tevere's personifications; elements characterizing them are a Sfinge and the Lupa with the twins.
Then there is another statue, of uncertain location: a crocodile, of onion marble to reproduce the variegated skin of this animal in whose jaws was located a lead tube from which the water gushed. In the south the channel finishes with a rectangular swimming pool, behind which an exedra, with concave and plans gores in alternation, surmount by a dome opens. In the center of this exedra there is a corridor with barrel vault, on the bottom of which gushed a cascade, destined to feed the channel.

In the exedra's circular niches there were statues, while in the rectangular niches there were cascade fountains; the bed used for the banquets was at the center of the exedra and it was constituded by a seat with an arched plan; a big coenatio, therefore, that was destined to the summery dinners, because of the cool created by the presence of many jets of water and cascades. The nymphaeum to exedra is called Serapeo from the temple of Serapide situated in the city of Canopo. The digs gave back a great amount of statues, currently conserved in the Antiquarium of the Canopo, gained in the '700 in ancient places and recently restored and furnished again.