Opposite, on the left, we go to Via del Riserraglio, where in the ancient time were the Posterula of Vesta. At the civic number 4 and 6 there are two nice small buildings: the first, dated back to the year 1353, with a main door with travertine ashlar and the second, dated back to the XVI century, with travertin portal and with travertin windows at the first floor. Both the buildings show on the main door the coat of arms, formed by a rosette with a San Bernardino da Siena's monogram. This tortuous way drives us to the characteristic Piazza del Riserraglio. 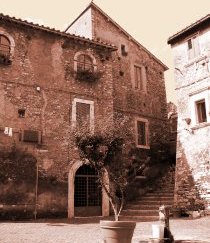 From here we can go down across Via Vesta; a downhill stretch takes us to Via degli Stabilimenti. This way, restructured not long ago, is the zone of the ex paper mills. We can admire the beautiful view on the gorge of the water fall and then we'll go to the hill which takes us to the Castrovetere quarter.
So we arrive in the heart of the quarter, Piazza della Cittadella; a silent narrow alley takes us to the small square of the Tempio di Vesta. We'll go on into Via della Sibilla. On the right, going on in Vicolo Ciaccia, we arrive in Piazza San Giorgio, dedicated to the homonymous saint, as the small church.

That church in the past was dedicated to San Michele Arcangelo and was built with the attached convent of Santa Chiara's nuns, who moved here from the old convent of Santa Caterina, located in Piazza D.Tani, in 1571. But, returning to go through Via della Sibilla, we can surpass the Rione Castrovetere's entrance door and we can walk across San Martino bridge, which connects the city to the old acropolis, divided by a deep ditch. Immediately after the tower house put to defend the bridge, on the left we go down across Via delle Mole, where you can enjoy excellent view of the gorge. 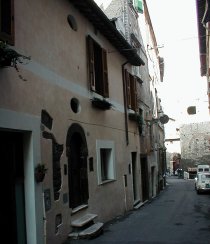 Going through Via della Sibilla, we meet at first, at the civic number 22, the architectural building of the XVI century belonging to the patrician families of Tivoli De Rossi-Susanna, then, on the left, at the civic number 8, the Principe Orsini's Palace. That building, dated 1200, was built on the ruins of Loreius Tiburtinus's home (he was a man of the ancient Rome).
In 1356 the prince Giulio Orsini assembled some noblemen of the city to withstand to the advance of the army of Filippo II, king of Spain, coming from Napoli. In the basements of the Palace assembled the citizens who took sides for Orsini's family against Colonna's family. Via della Sibilla leads to Piazza Rivarola, dominated by an example of tower house with clock. To go to Villa Gregoriana is necessary to cross Ponte Gregoriano.

From Piazza Rivarola we take the hill on the left, Via del Ponte Gregoriano, and then, halfway up the hill, we'll take Via dei Sosii, always on the left.
You can admire on the left the Regnoni-Macera Palace, of the XVI century, with its nice stone-portal. Here the Pope Gregorio XVI, in the far 1834, stopped to see the narrow underground passages excavated under Monte Catillo and to be present at the procession of the Madonna di Quintiliolo. In front of the building there is a construction of the Middle Ages (Viscardi's home) in which showsup a window provided with centering, probably Angelo da Tivoli's work; there are a lot of roman elements re-used. Then we can pass in front of the ancient entrance of San Biagio church, always on the right at the civic numbers 53-57; now, arrived at the Gemma's fountain (a midwife very famous among the parturients of Tivoli), begins Via Domenico Giuliani. Immediately after, on the right, we start to go up across Vicolo Torlonia. We'll arrive to the church of Sant'Andrea, risen from the ruins of Diana's temple. The first building is dated 1285, but it was rebuilt in the second half of the XIII century, with the annexed bishop Filippo Gezza de Rufinis's cloister. From the church we'll go on across Vicolo Lolli, which takes its name from the small building (XVI century) of the Lolli di Lusignano family, constructed on the old Diana's baths, at the civic number 4 of Via dei Sosii. Crossed the arch, we are in Via del Trevio, which this time we travel back wards, so arriving at Largo Garibaldi, our point of departure.